Use of oral fluid (saliva) in toxicology has been increasing within recent years due to its non-invasive, low cost effectiveness in recent drug use detection. There is little opportunity for adulteration of the sample and a large volume is not required for collection and analysis. Liquid chromatography tandem mass spectrometry (LC-MS/MS) has proven to be a useful tool in the analysis of oral fluid due to its ability to run highly sensitive assays. The necessity for a sensitive assay is especially important in the detection of an analyte and its analogues that are administered in low concentrations. Detection of fentanyl and its analogues such as furanyl fentanyl and sufentanil, have become important due to the increasing widespread use of illicit fentanyl formulations in heroin and counterfeit opioid tablet formulations. Suppliers of illicit heroin are developing fentanyl analogues and including them as cutting agents in the final product due to their high potency and relatively low production cost. As a result, development of a method to detect these compounds has become vital to many toxicology labs. Thomson eXtreme Filter Vials provide a simple and efficient extraction technique that has demonstrated adequate analyte recovery, reduced matrix interferences from a simple dilute-and-shoot method and the elimination of solvent waste and other consumables. This project specifically explores the efficacy of these vials in extracting a range of fentanyl analogues in oral fluid specimens.

Samples were analyzed using a Shimadzu liquid chromatograph and ABSciex Triple Quad mass spectrometer. The developed method injects 12 µL of sample onto a Kinetex® Biphenyl LC column. The sample is chromatographically separated at a flow rate of 0.7 mL/min using the following gradient in table 1.

Adequate chromatographic separation of all tested analytes was achieved while still attaining optimal sensitivity. Calibration range was established between 0.5 ng/mL to 20 ng/mL for each analyte. Controls sufficiently passed quantitatively and qualitatively within established ranges of targeted values (1.5 and 15 ng/mL respectively). To obtain the undiluted concentration of analyte in the sample, values were multiplied by a factor of three.

fig.2Chromatogram of a calibrator containing all analytes

fig.3Calibration curves for each of the analyzed fentanyl compounds

Furanyl fentanyl appeared to have an interference peak present during method development. Analysis of solely the oral fluid diluent compared to the infusion data of furanyl fentanyl showed the presence of a co-eluting peak. Altering the MRM transition of the qualifier ion appeared to eliminate this issue. 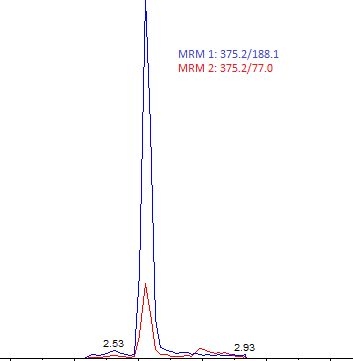 Of the 100 authentic oral fluid samples analyzed, 4 were positive for fentanyl at or above the established cutoff of 0.5 ng/mL. The specimens were collected from both pain management and addiction clinic patients to target a population with a higher incidence of fentanyl and illicit drug use.

A simple, rapid, and accurate comprehensive method was developed for the detection of these 6 analytes in oral fluid samples. In method development, one compound appeared susceptible to matrix effects from the oral fluid diluent utilized as the negative buffer. According to literature and infusion data for furanyl fentanyl, the MRM transition of 375.2/105.0 is commonly recommended due to its high intensity. This transition proved to have an interference peak present in the oral fluid diluent causing chromatographic resolution issues. This interfering peak was eliminated upon the change of the transition to 375.2/77.0. Additional research may be required to determine if this interference exists solely with the Intercept i2he Oral Fluid Diluent or amongst all buffers used in oral fluid assays. While only four samples had levels of fentanyl above the current limit of quantitation (LOQ), fentanyl and acetyl fentanyl were detected in additional samples below this established LOQ. The LOQ required for clinical relevance was unknown based on the lack of literature resources available containing information on fentanyl analogues and their concentrations in oral fluid. This indicates that additional studies need to be performed to determine the lowest achievable LOQ. The developed method utilizing the eXtreme filter vials proved successful in extracting and detecting fentanyl and five of its analogues present in oral fluid with a high level of sensitivity and accuracy.

Use of oral fluid (saliva) in toxicology has been increasing within recent years due to its non-invasive, low cost effectiveness in recent drug use detection. There is little opportunity for adulteration of the sample and a large volume is not required for collection and analysis. Liquid chromatography tandem mass spectrometry (LC-MS/MS) has prove...